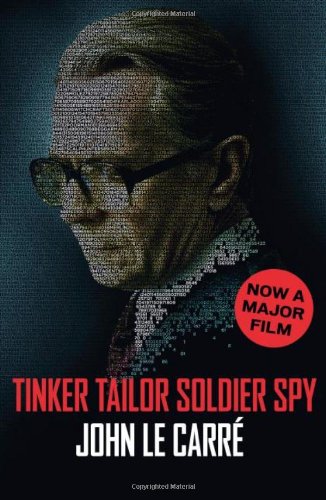 Action movies have led many of us to believe that espionage is the combination of explosions, soft killings, six-packed agents and the thrill of the chase.

Reality is, however, a bit less exciting. Hell, a lot less exciting. Reality is, most of the time, about making sense of what seems like tons of meaningless information in order to find patterns – and while that doesn’t sound exactly like a blockbuster movie on the make, it sure can translate well into a novel when the job is well done.

That is precisely what Tinker Tailor Soldier Spy (John le Carré, read on paperback, Sceptre, 448 pages) is all about. The plot follows George Smiley, an MI6 (or “Circus”, as it’s referred to throughout the book) agent, in his attempt to find a mole that, during the Cold War, is on the high ranks of the British Intelligence while feeding the KGB with inside information.

I find it necessary to make something very clear to anyone interested in reading TTSS: the book is boring. Yes, boring. Not only because it moves slowly, but because it is subtle in every discovery, making the readers wonder if they have correctly understood what has just happened. Every revelation is a small victory and you have to pick the pieces throughout the book in order to make sense of what has happened in the past, so don’t expect crazy-running-around-solving-clue-after-clue Dan Brown action. You won’t have any of it.

It is, however, absurdly satisfying. The fact that it is slow means the reader has a chance to read with Smiley and watch him as he finds every tiny secret that leads to the climax. I am still quite intrigued by how it can be such a good read when it’s so – again this word, but there really is no other – boring. The final result is delicious, just as solving a puzzle or winning a game is, because the process is so realistic it makes you crave for the discovery just as much as Smiley does.

Smiley is a portrait of the modus operandi used to find the mole and tell the story: slow, simple, kept-together, unpretentious, but highly intelligent. Smiley is a boring, gray, sad character, which only makes his surname more brilliant. You will root for Smiley as you would root for a stray dog as you watch him do tricks you wouldn’t expect him to know. No one is better to spy on spies than a man who doesn’t look like one at all.

This is, in the end, a great, great book. The story, once one finishes reading it, is perceivably well plotted – it gives neither the annoying feeling that the author kept all the secrets to himself, which ruins plot twists, nor the chance to figure it all out with a fifth of the book read. Beautifully written, the reader immerses himself into Smiley. And what else could be more explosive than to feel, for once, like you are actually a spy?